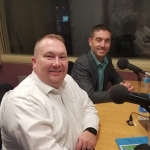 State Senator Scott Bennett and Representative Mike Marron agree that passage of new coal ash legislation was one of this year’s biggest accomplishments for Vermilion County.  Senator Bennett sponsored Senate Bill 9 and he talked about what it does on WDAN Radio’s Newsmakers program Thursday….

{‘’What is does is makes sure that anyplace that maintains these coal pits has to set aside bonds or other assurances, so if there is a spill – that pays for it, not taxpayers. And the second thing is – we need to make sure we have enough people from the state government monitoring the water wells, monitoring the groundwater.  And so they are going to have to pay fees as we go, that will go directly to the EPA to pay for more engineers and hydrologists and others to actually be making sure it’s safe in the meantime,’’ said Senator Bennett on the program.}

Representative Marron says now that the legislation is in place, hopefully there will be some resolution to the concerns along the National Scenic Middle Fork River here in Vermilion County…

{‘’You know I do think it’s an incredibly important issue for this district with the coal ash from the Dynegy plant on the Middle Fork River, which is a huge liability for the people of this area – for the environment in this area,’’ said Marron.  ‘’And it’s just about personal responsibility.  I’m a pro-business guy and I want to be favorable to business.  But if you make a mess – you clean it up,’’ said Marron.}

The two legislators are from opposite parties with Bennett being a Democrat and Marron a Republican…but they have joined efforts several times this year on issues they say were for the good of the county.  One of them was the casino legislation. And both say next year will be interesting with such issues as the vote on the proposed graduated income tax coming up.