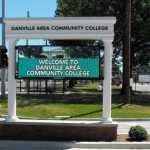 Danville Area Community College trustees are excited about plans for new development on the campus.  DACC President Stephen Nacco says thanks to a $2-million dollar gift from the late Julius W. Hegeler II, Jacobs Hall will be renovated…

{‘’Those plans will begin really in earnest – by the beginning of the year, January – February – and then build during the summer.  Rehabilitate that facility, and ideally by the fall be able to have our students be able to perform in there, put on plays in there, recitals, pep band – blow the roof off the place,’’ said President Nacco. ‘’I was in there today with my clarinet.  My little squeaky clarinet sounded like Benny Goodman in there.  The acoustics are phenomenal.’’} 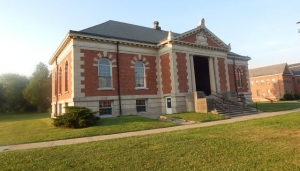 Jacobs Hall is a Carnegie Library (shown here) which is being transformed to Jacobs Hall…honoring Dr. Alice Marie Jacobs who served as DACC president for 17 years.

Another project will see the college’s nursing program move into what was a U.S. Army Reserve building that has become part of the DACC campus….

{‘’RAD Tech, Echocardiography, Sonography eventually becoming part of that facility will enable us really to grow the nursing program in ways that they’re going to better support Christie, Carle, and OSF in terms of their needs for nurses,’’ said President Nacco during an interview with VermilionCountyFirst.com News.}

Danville Area Community College trustees were told last night that the college will be able to double its nursing program in that new space.

The college will be moving some math classes into the current space that will be vacated by the nursing program, and will also expand a weight room for college athletes.