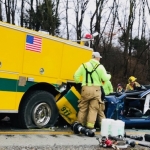 A collision between a car and a Cloverdale, Indiana fire truck early Sunday along Interstate 70 has claimed a life.  Indiana State Police say 23-year-old Jenna Monet of Prescott Valley, Arizona died at Terre Haute Regional Hospital Sunday (December 29, 2019).  Troopers say she was a passenger in the car which was being driven by 25-year-old Derrick Monet, also of Prescott Valley, Arizona.  He was taken to Terre Haute Regional Hospital with serious injuries.

There were no injuries to firefighters. 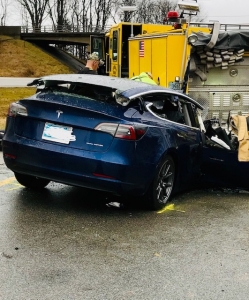 State Police say the Cloverdale Fire Department had responded to a single-vehicle accident along I-70 near the 38 mile-marker.  Upon arrival all fire equipment was positioned in the passing lane of the interstate with all emergency lights activated.  State Police say Derrick Monet failed to observe the emergency vehicles were stopped in the passing lane and his car hit the rear of the fire truck.  Both occupants had to be extricated from the wreckage.

Indiana State Police say drugs and alcohol are not a contributing factor in this tragedy.