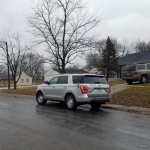 Danville Police say five women were wounded when shots were fired into a home in the 1800 block of Westview early Sunday.  Sergeant Eric Olson of the Danville Police Criminal Investigations Division says officers responded to a report of shots fired with multiple victims at 12:41 a.m.

Officers arrived and discovered five women, between the ages of 18 and 32 years old, were inside the residence and all had been struck by gunfire.

Four of the victims were transported to Carle Foundation Hospital in Urbana and the fifth was taken to OSF Sacred Heart Medical Center in Danville.  Witnesses advised the victims were shot by someone who fired into the house from outside.

Sergeant Olson says as of late Sunday morning all five victims were listed in stable condition.  He says the investigation is ongoing, and no other information is being released at this time.

Anyone who has information that might help in the investigation is asked to call Danville Police at (217) 431-2250….or Vermilion County Crime Stoppers at (217) 446-TIPS.