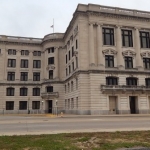 A man who prosecutors say reached into the cash drawer of a Danville gas station…grabbed cash and fled…is facing an 8 year prison sentence.  Forty-seven year old Shane Winbush admitted the robbery charge in Vermilion County Circuit Court and was then sentenced to 8 years in the Illinois Department of Corrections.

Danville Police say Winbush entered the Circle K Gas Station in the 400 block of West Main Street on September 26, 2017 and stole the cash.  He was arrested just over 10 hours later.

Winbush will receive credit for the time he has been in custody since his arrest.  His case had been delayed earlier when a judge ruled he was not mentally fit to stand trial.