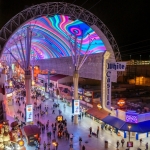 Employees at one Danville industry are particularly excited about this New Year’s Eve.  It is because Watchfire’s new canopy display for the Fremont Street Experience will be unveiled in Las Vegas.

Watchfire was selected from digital screen manufacturers around the world to completely design and rebuild the 1,377 feet long canopy.

Kim Weninger is the Chief Operating Officer at Watchfire… 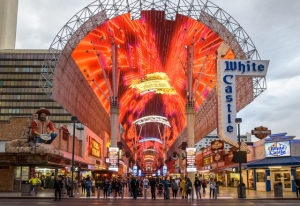 {So we tried some laser scanning (and) that didn’t work.  There were no as-built drawings, so you know, our engineers did an amazing job,’’ said Weninger.}

The new LED display will be four times sharper and seven times brighter then the canopy which has attracted visitors there at night….

{‘’The good thing about our sign now is that they can also run it during the day.  So, you can imagine, the casinos, and the restaurants, and the hotels now get people there during the day – not just at night,’’ added WatchFire Chief Operating Officer Kim Weninger.} 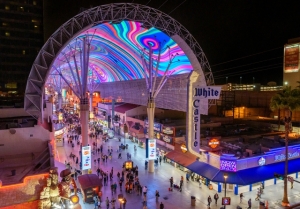 Watchfire manufactured over 66-thousand modules for the project since construction began at its Danville plant in December of 2018.

Weninger added she could not be more proud of the Danville Watchfire employees who made it all possible.

Freemont Street Experience attracts more than 23 million visitors annually and is adjacent to 10 casinos and more than 60 restaurants. Tickets went on sale on November 27th for the New Year’s Eve unveiling of the remodeled canopy.

[**Our thanks to WatchFire and the Freemont Street Experience for photos and other information contained in this story. You can click on the photos to enlarge them. The audio with COO Kim Weninger is from WDAN Radio’s Newsmakers program in Danville, Illinois.]

[This story written and posted on December 30, 2019 by Neuhoff Media Danville News Director Bill Pickett. Got a news tip?  Give Bill a call at 217-709-1245 or reach him at BillPickett@Neuhoffmedia.com.]