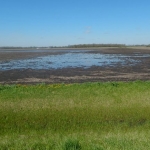 Area farmers, and those across a wide part of the nation, are hoping that 2020 will be a better year.  Tom Fricke, Public Information Spokesman for Vermilion County Farm Bureau, notes there was disastrous flooding and large snowstorms early last year across Iowa, Nebraska and Missouri – and lots of rain which delayed planting in our area…

{‘’A lot of planting didn’t happen until late May or the first half of June, so that impacted then the harvest season as well running late,’’ said Fricke. ‘’A lot of harvesting taking place in November and even into December for a lot of farmers in our area,’’ he added.  ‘’I think for the most part everything has gotten out.  There are isolated fields here and there that may still need harvesting, but for the most part Vermilion County farmers, I think, have been able to complete nearly all of their harvesting activities for 2019.’’}

And Fricke says local farmers have also been keeping a close eye on other issues during 2019.. 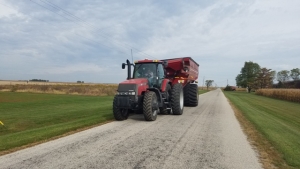 {‘’Including the on-going trade dispute with China,’’ said Fricke.  ‘’We’re hoping that can get resolved as we move forward.  But we did see some movement in other trade deals with the House of Representatives passing the U.S.M.C.A. agreement between the U.S., Canada and Mexico.  (We’re) looking forward to the Senate taking that up early here in January and passing that as well.’’}

{‘’Farm Bureau and others in Agriculture continue to work with EPA and USDA on the Renewable Fuels Standard that waivers have been issued for, and that’s impacting the ethanol market and causing many ethanol plants to close.  So we will keep working on that issue as we move into the new year,’’ added Fricke.

And Fricke says he is sure there will be other issues, too, during the new year.  He was commenting on WDAN Radio in Danville.

[The top photo taken June 20th, 2019 shows some of the conditions that farmers were still dealing with into summer in Vermilion County.]