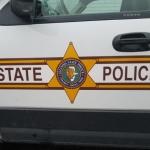 Illinois State Police say a Minnesota man was arrested Thursday (January 2, 2020) on weapons charges after he drove into a restricted area at the Pesotum State Police headquarters.  Thirty-eight-year-old Jeffrey Heard was charged with Possession of a Firearm on State Supported Property, Possession of a Controlled Substance, and Possession of Cannabis.

A trooper confronted Heard immediately after the vehicle entered the restricted area and noticed Heard had a handgun on him.  A subsequent inspection of Heard’s truck found 3 handguns, a rifle, multiple magazines, and about 2,400 rounds of ammunition.

State Police say Heard was found to be in possession of a valid Minnesota concealed carry permit.  At this time, District 10 personnel do not believe they were a target or that Heard intended to harm any law enforcement personnel.

The investigation is continuing and State Police remind the public that all subjects are presumed innocent until proven guilty in a court of law.

{This story posted on VermilionCountyFirst.com on January 3, 2020.}