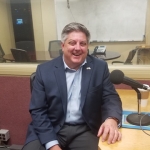 Vermilion County Treasurer Darren Duncan says sharing ideas and debating the issues are wonderful and he enjoys it.  He is one of six Republican candidates seeking the nomination in March to run for the 15th District Congressional seat currently held by John Shimkus.

Duncan says he was not planning to run for Congress, but says when State Representative Mike Marron decided not to run for it….

{‘’But (there was) a lot of encouragement. They had some folks even circulating petitions on my behalf to consider getting my name on the ballot – also to convince me that it was something that local people, perhaps, wanted,’’ said Duncan.  ‘’So being a small town guy and a farmer, I kept looking for maybe a candidate that would have that background and run and understand those issues deeply, and I just didn’t see it.  So I decided one day after a lot of encouragement that I would run. I want that voice to be heard,’’ said Duncan on WDAN Radio’s Newsmakers program.}

Duncan is 48, married, and the father of four daughters. He grew up on the Duncan farm in northern Vermilion County – which as of this year – has been in the family for 200 years through 6 generations.

Duncan says he is very knowledgeable of the issues in this area, and is eager to learn more about top concerns of citizens across the district…

{‘’Understanding the issues of Vermilion County are something I’ve lived and breathed for years.  Learning some of the issues from the south – and the coal energy industry,’’ said Duncan. ‘’You know they have coal down south and that’s a big part of what they want to talk about and learn a lot about that. Up here we have wind turbines, and so the difference – the regional differences within the Congressional district – so I’m getting experience there. But I’m excited,’’ added Duncan.}

Duncan was commenting on WDAN Radio’s Newsmakers program.  Host Linda Bolton said other congressional candidates will also have the opportunity to appear on the show if they wish.