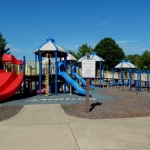 Danville City Council members members have unanimously approved a memorandum of agreement with Danville AMBUCS for planned improvements at the ‘AMBUCS Playground for Everyone’ which is located at Winter Park.

Bill Fulton, co-chair of the project, says the current playground is ‘’beginning to look a little tired.’’  The AMBUCS and City of Danville combined efforts which resulted with the opening of the playground in July of 2001.  ‘’Danville AMBUCS’ passion to provide children and families of all abilities a safe, fun and challenging play space is as strong as it was in 2001, ‘’ says Fulton.

The City of Danville plans to partner with in-kind services to assist with the makeover of the playground.

In addition to the improvements planned at Winter Park the City of Danville is also working on some major improvements at Ellsworth Park.