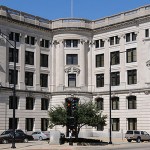 A Danville man who has helped kids in both theatrical and music programs has pleaded guilty to Aggravated Criminal Sexual Abuse.  Forty-three year old David Woodrow was sentenced to four years probation and ordered to register as a sex offender by Circuit Judge Nancy Fahey as part of a plea agreement today (Tuesday, December 7, 2020).  Five other felony counts of Aggravated Criminal Sexual Abuse against Woodrow were dropped as part of the plea agreement.  The defendant has no past criminal record.

The young man involved in the charge in which Woodrow pleaded guilty was 15 at the time of the offense in 2011.  He addressed Woodrow and others in the courtroom before the judge passed the sentence.  ‘’I thought he just made a mistake, several mistakes,’’ said the young man whose name we are not using to protect his identity.

‘’I now know the truth – you manipulated me,’’ he added. ‘’You stole my childhood away from me and my parents.’’

Tired of the continuances in the case, the young man told Judge Fahey it was a shame that while Woodrow had a ‘’jolly holiday my whole family wondered – is it ever going to be over?’’  The young victim also had another message for Woodrow:  ‘’You are sick and you deserve a worse punishment.’’

And the youth turned to his parents. ‘’Please forgive yourselves so I can be free – and so you can be free.  This is not your fault.’’

The youth’s father also made a statement prior to sentencing. VermilionCountyFirst.com News is also withholding his name to protect the identity of the victim.

The father thanked Danville Police, Vermilion County Sheriff’s Deputies, the State’s Attorney’s Office and Vermilion County Rape Crisis Center. ‘’This particular type of evil is everywhere,’’ added the father.  ‘’It’s everywhere – and it has to stop!’’