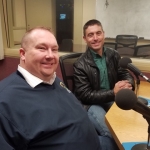 Recreational cannabis sales have been going strong in Illinois since the pot sales were legalized on January first.  But State Representative Mike Marron says he was surprised by the long lines at dispensaries….

{‘’I guess I shouldn’t have been but I was, and of course it gives me a little heartburn.  I was opposed to the legalization,’’ said Representative Marron on WDAN Radio’s Newsmakers program. ‘’I think I was open-minded about it and I think there were definitely some good arguments for why we did what we ultimately did – but I think I still have some concerns,’’ added Marron.

Employment issues and driving under the influence are a couple of the issues Marron says need to be clarified.

Senator Scott Bennett notes that when legal recreational cannabis sales began there were 40 active dispensaries in the state…..

{‘’Now we’re expecting sometime mid-year, they’re going to have over a hundred dispensaries in the state. …. And so before we get to that point – where you’re talking about two or three times as many dispensaries in the state where you can legally buy cannabis, we’re going to have probably quite a few tweaks to do in the bill,’’ said Senator Bennett.}

A new dispensary along Lynch Road, on Danville’s east side, is expected to open soon.

[In the photo Senator Bennett is on the left and Representative Marron is on the right.]