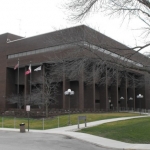 Danville Police are probing a vehicular hijacking involving a pizza delivery driver Wednesday night (January 8, 2020).   Police Commander Joshua Webb says officers were called to the 800 block of Harrison Street regarding the incident shortly after 7:00 p.m.   They met with a female who said she had exited her vehicle to make a pizza delivery when she was approached by three black males.

The victim said two of the subjects were armed with handguns, and all three got into her vehicle which was still running.  The victim said when she tried to stop the suspects from taking her vehicle one of them pointed a gun at her and threatened her.

It was not long after the three stole the female’s vehicle that police located it – abandoned in an alley near Bowman Avenue and Seminary Streets.   Further investigation revealed the suspects stole pizza and some of the victim’s personal items from the vehicle.  The victim was not injured.

Danville Police are continuing to investigate this incident and say anyone who has information that might help should call them at (217) 431-2250.   Or you can call Vermilion County Crime Stoppers at (217) 446-TIPS.