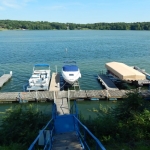 The Production Manager of Aqua America, Inc. in Danville, David Cronk, says he is excited about progress being made to update a 2008 study of the Lake Vermilion Watershed.   Cronk addressed about twenty-five area farmers and agricultural leaders at a forum at the Vermilion County Farm Bureau Thursday….

{‘’We’ve got a plan coming together in place.  And hopefully, in the near future, we can start putting those plans into place that we can improve the watershed and water quality into the lake,’’ said Cronk during an interview with VermilionCountyFirst.com News.} 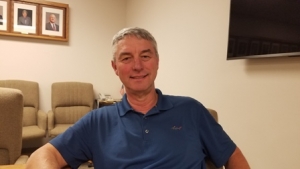 Cronk says a grant obtained by the Vermilion County Soil and Water Conservation District is being used to try to improve the quality of water running into Lake Vermilion….

{‘’With this plan it actually gets into the specific areas, not just an overall (area).  And once these areas are realized then the next step will be to actually do recommendations on what will help these areas out – what best practice can be used to reduce whatever sediment, nitrates, or whatever pollutant is entering the creek, the stream – and reduce those,’’ added Cronk.} 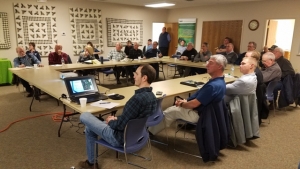 {‘’We did that study last year to see how much water we had – how much capacity we had left in the lake.  And it was kind of surprising that it’s dropped that much in 25 years,’’ said Cronk. ‘’It’s still loading sediment in the lake and in the future there will have to be something else done because it’s just going to get shallower and shallower as the years go by,’’ said Cronk.} 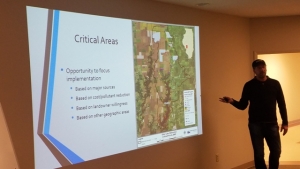 Aqua shares information with the Vermilion County Soil and Water Conservation District on nitrate levels in the lake.  Cronk says the water company earlier built a system at the Danville plant to address the sometimes high nitrate levels.  But he notes operating the system is expensive, so Aqua would rather try to find ways to improve the water quality coming from fields upstream.