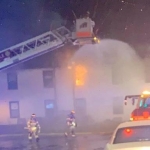 Danville Firefighters say no one was hurt in a blaze at an 8-unit apartment building in the 1200 block of Garden Drive Saturday night.  Firefighters were on the scene for more than six hours after the original alarm sounded at 6:39 p.m.  They say the fire started in a kitchen of one of the units, but the exact cause remains under investigation.

The American Red Cross was on the scene within an hour of when the blaze started to help provide assistance for the affected occupants.  All 8 apartments had people living in them at the time.

Some off-duty Danville Firefighters were called to assist on the scene.  And Danville Mass Transit also sent a bus to the scene to help.

Although flames spread through some utility spaces and got into the attic, firefighters were able to contain it from causing more severe damage.

[The photos are courtesy of Danville Firefighters and OSF Pro Ambulance Service.  You can click on them to enlarge them.] 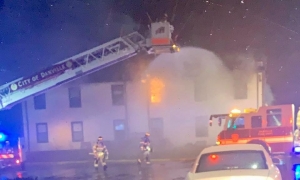