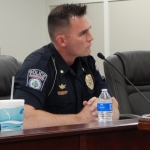 Danville Police Chief Christopher Yates says he is encouraged about the enthusiasm of some community stakeholders who discussed various issues facing this area Tuesday.  Chief Yates says it’s important to recognize the concerns, gather data, and then see what can be done about tackling those underlying issues.

Chief Yates was one of the speakers at a meeting hosted by the Vermilion County Health Department at Danville Area Community College.

Those in attendance reviewed the results of a new Health Assessment and Community Health Plan for Vermilion County.

Some of the findings of the study include:

The stakeholders have scheduled another meeting for February 25th and plan to continue addressing the issues raised in the report.