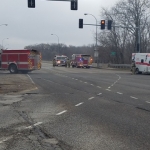 Traffic is flowing normally across Danville’s Memorial Bridge after an inspection by the Illinois Department of Transportation.  But Tuesday a small fire underneath the north end of Memorial Bridge sent smoke billowing out over Danville’s downtown area Tuesday afternoon. (January 14, 2020).  It also caused quite a traffic jam as police were forced to shut down the busy intersection of Main and Gilbert for a while.

Danville Police say they took a man into custody for questioning in connection with the fire.   Initial reports from police said the fire apparently involved some electrical wiring that was being burned. Police said there were also reports there were some propane tanks in the area where the fire occurred.

Firefighters had to go underneath the bridge in order to reach the area where the blaze was located.  But once they got there they were able to quickly extinguish the fire.

The fire occurred right as rush hour traffic was heading into the area.   Police stopped northbound traffic at the south end of the bridge.  And traffic on Main Street could not get through because of a fire hose stretched across what is normally Danville’s busiest intersection.