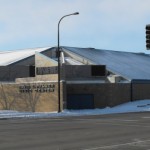 A little less than a month into his new position as manager of Palmer Arena, Joe Dunagan said his short time at the helm has been fantastic.

The arena staff was busy this past week preparing for the Vermilion County Basketball Tournament which is now underway at the Arena. Dunagan said the arena’s staff installed the basketball court, students will do video and the staff is also organizing concession workers. He said the arena has improved the locker rooms somewhat and has also replaced some chairs in the building. But Dunagan noted the actual changeover from hockey to basketball doesn’t happen until shortly before the start of the tournament.

One question the Danville native often receives is what kind of events he is looking to bring to the arena. On that note, he said he is open to anything. Wrestling is growing in popularity, and the arena has hosted wrestling meets this year. In the end, he said, money is the big factor.

Among the events Dunagan is looking at potentially coming to Danville: archery, rodeos, concerts, comedy shows, banquets and even wine tasting.