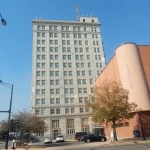 The City of Danville has received a single bid on what it would cost to demolish Collins Tower, formerly known as Bresee Tower, in the city’s downtown area.  Public Works Director Carl Carpenter informed city council members about the bid during last night’s meeting, noting that it also includes a bid for demolishing an annex where some county offices were previously located.

Details of the bid were not revealed.  Instead, Carpenter said he would be forwarding the information to Mayor Rickey Williams Jr. and members of the city council.

The Mayor was looking forward to reviewing the numbers…

{”I’m just hoping that they came in with reasonable numbers,” said Mayor Williams during an interview with VermilionCountyFirst.com News. ”But having numbers will allow us to forge a plan for moving forward.  Without numbers we’re kind of just guessing, estimating what it could be.  Once we have solid numbers that will allow us to work with the County to determine the best movement forward,” added Williams.}

So does getting a demolition bid mean the city is making plans to demolish the building?….

{”Not yet. I mean I imagine it will have to go to court with Mr. and Mrs. Collins and/or Scottie Porter who owns the top floor still,” said the Mayor}

Vermilion County still owns the annex, but Collins Tower is still privately owned.  The City has been concerned for years about terra cotta that has at times fallen from the structure’s exterior.   Because of the concerns a decision was made earlier to shift some of the traffic which runs in front of the building.

[>>>This story by Neuhoff Media Danville News Director Bill Pickett.  Got a news tip?  Give Bill a call at (217)-709-1245, or contact him at Billpickett@neuhoffmedia.com.]