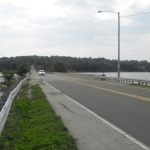 City Engineer Sam Cole says there is a good chance that a portion of the loan could be forgiven later on….

{‘’We will do the application. Basically once we are selected, prior to entering into a construction agreement with the contractor we will know what we are approved for,’’ said Cole at Tuesday night’s city council meeting. ‘’We won’t receive the actual forgiveness until the back end of construction, but we will know what they’ve allocated to us.’’}

The City plans other improvements along Denmark and Old Ottawa Roads, including a shared use path that will include a pedestrian walkway that will be adjacent to the Dallas Bowman Bridge over Lake Vermilion.  The sewer work is the first phase of the project.