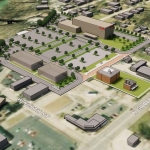 Danville City Council members have approved transferring fifteen parcels of land to Carle Health Development, LLC. for the new Carle at the Riverfront project.   The land is all located in an area west of Gilbert Street – between North and Madison Streets — where Carle plans to build a new $70-million dollar medical campus.

It is the last land that Carle needed to acquire for the project. City Council members agreed to waive the normal process pertaining to the sale of municipal real estate. City Council members agreed it was no longer in the best interest of the City to own the property, and that the surplus property is not profitable. The ordinance approved by the council said ”the City Council finds and determines that the best interests of the City and its residents will be served by disposing of the Real Property.”

The lots being transferred to Carle which are currently owned by the City of Danville are located at;

Once the new $70-million dollar medical campus is completed, Carle plans to move offices there from its present locations on North Vermilion and at Gilbert and Fairchild Streets there.  Carle also plans to base its ambulance service at the new campus. It expects construction to be completed late next year.