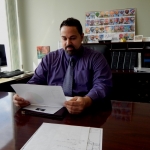 Danville City Council members have approved the city’s new fiscal year 2020-2021 budget.  Alderman Rick Strebing said it was one of the smoothest years he can remember for getting it passed.  Mayor Rickey Williams Jr. agreed…

{‘’Good stewardship makes things a lot easier,’’ said the Mayor. ‘’By us eliminating unnecessary positions – especially in the middle management level – bringing salaries more in commensurate line with other entities that are similar to us — as they should be, and just making good choices – we don’t have to fret and fight and scrimp and save because we’re being wise with the taxpayer’s money,’’ said Williams during an interview with VermilionCountyFirst.com News.

And the Mayor added there is good news for taxpayers, too….

{‘’I’m really excited.  This budget did not require any tax or fee increases whatsoever, Bill.  In fact, the total amount of tax levy that we’ve requested is slightly lower than last year.’’}

The budget approved at Tuesday night’s city council meeting totals over $53-million dollars.  It covers the fiscal period running from May 1st of this year through April 30th of next year.