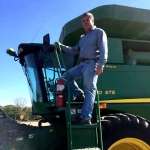 The 15th congressional district includes all or parts of 33 counties in east central and southern Illinois. The primary election is March 17.